Luke is in his 4th week back in school following the Summer holidays and so far he is doing great.  We did have a small behavioural incidence on the first week, but I think the excitement and nervousness of going back to school was a little overwhelming.

He seems to be working hard in class, he tires easily and sometimes he will take a break from the school work and maybe get a little fresh air outside so we are lucky that his teacher and the school in general are so accommodating.  He’s also back at Jiu jitsu, which he loves and is a great outlet for his high energy! 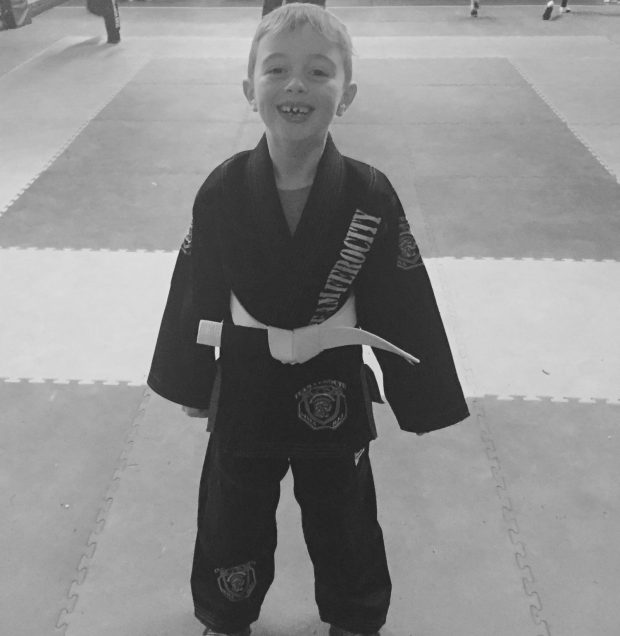 I have noticed he is a little irritable and this week he has picked up a Viral infection and the re-emergence of cold sores.  It’s not surprising really picking up something when he is just back to school, but still annoying.

With regards to seizure control, Luke is now on a good dose of Lamictal in conjunction with Vimpat and Frisium.  I don’t want to speak too soon, but he’s doing pretty good –  currently he has been 5 nights with no seizures which is by far the most he has gone since his diagnosis in March and we haven’t seen any clustering in 10 days so all in all a dramatic drop in seizure frequency.  But the one thing I have learned is that as soon as you get complacent something changes, epilepsy is like that – you never quite know where you are with it.  However my mindset is adjusted to not necessarily seeking total seizure freedom for Luke – but simply to see more good days than bad.

We did get the results back on Luke’s genetic tests which were all clear for the specific genes which were tested, indicating that there is no known genetic cause for his epilepsy.  We are continuing to investigate  whether Epilepsy Surgery will be an option for Luke; although after our most recent meeting with the Consultant who oversees all potential surgery candidates we have been told that he is 50:50 on whether they will be able to locate a specific focal point for Luke’s epilepsy so to very much focus on gaining better control through medication.  He also feels that as Luke’s diagnosis was so recent, he doesn’t want to jump into surgery unless they are clear that the outcomes will be favourable and that we have exhausted all other medical treatments.  Our next step will be a PET Scan and further NeuroPsych analysis.

So all in all I am enjoying being back into the school routine, no mad dashes to the hospital, the phone is quieter as I am not calling in with the neurology team as frequently and for now normal is good – I like it!